SEUM has been founded from the experience of a Master Project “Equal”, a European Community initiative (2002 – 2005), which was held in Arezzo, with internship in Paris and Barcelona. The project provided for the formation of three groups of fifteen apprendices on a 960-hour course, in which several Yard Schools were included, in Italy, France (Paris) and Spain (Barcelona). In addition, several groups from abroad have been hosted in Arezzo, adhering to the principle of transnationality of the initiative.
SEUM believes that Yard Schools, or what was once called the craftman’s studios, are fundamental to complete the training of whoever wants to tackle a job.

Yard Schools are as necessary as classes and laboratory courses, technical and cultural visits, in order to fulfill satisfactory conditions of knowledge and capacity: hence the principle Learning by doing, the basis of SEUM’s philosophy.
Participants in SEUM’s initiatives are required to get tuned with the subjects of their intervention, to move to places where these objects are set up and interact with them, thus working directly on them. SEUM’s thinking can be summarised in three words: Art -Travel – Craft. 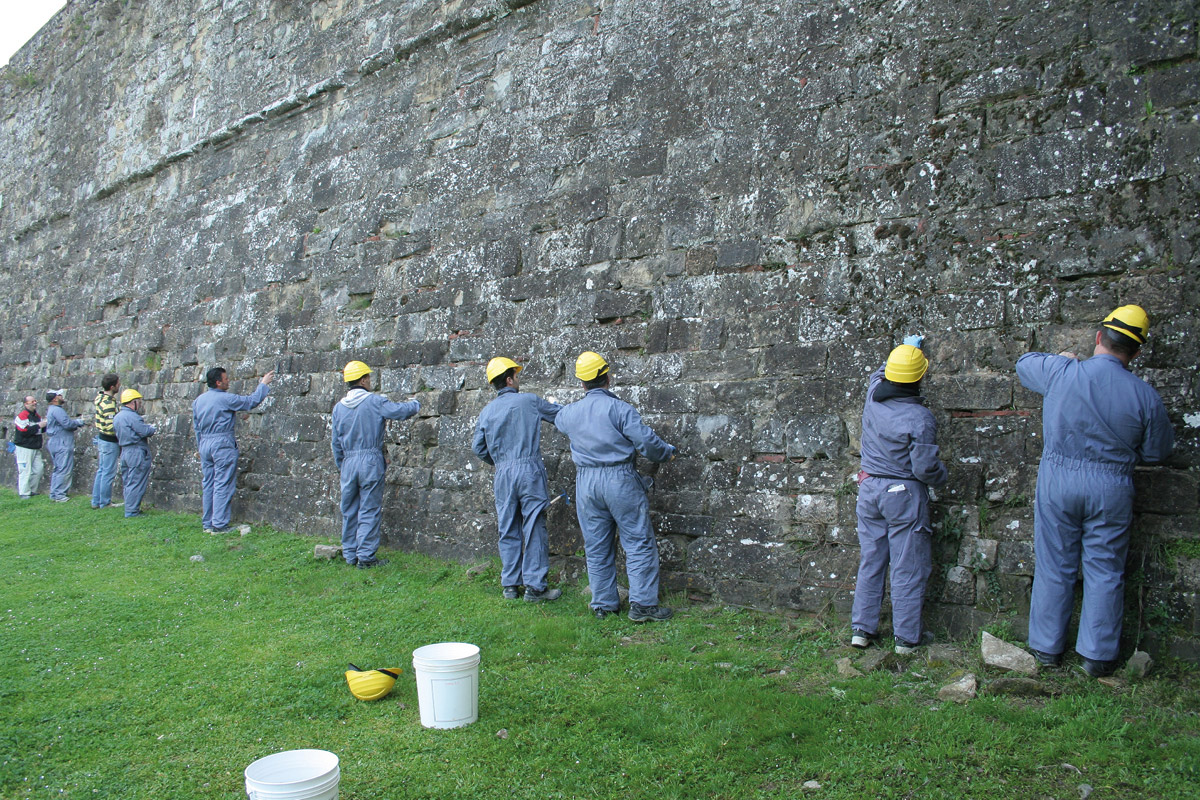 Palazzo di Pellicceria is situated in the historical center of Arezzo: It dates back to the Middle Ages, however it currently presents neo-medieval elements of the nineteenth and twentieth century. Several courses were held there as well as workshops, yards for craftsmen, technicians, entrepreneurs and professionals. The building is very suitable as it presents different constructive styles that span many centuries. Stratigraphic tests, reinforcement of the wooden plots of floors, dismantling and recovery of old floors, restoration of façades and masonry.

And then, consolidation or replacement of stone elements, restoration of plasters and paintings, of doors and windows, installing compatible technical facilities: all these topics were discussed in several courses where professionals, entrepreneurs and workers intervened. This is in accordance with SEUM’s philosophy, that knowledge, skills and abilities should be shared in both directions of all processes involving collective heritage, hence upstream and downstream.

Cortona is a small town founded by the Etruscans, lying on a hill slope facing Valdichiana, the valley of the river Chiana. Girifalco, a sixteenth century fortress, is located in a strategic position, overlooking an area that spans from Arezzo till Lake Trasimeno. It is therefore situated between Florence and Rome, surrounded by both Marche and Umbria Regions, which were under the domination of the Church. The fortress is fascinating; in spite of past interventions, it still needs much restoration and recovery.

A workshop has been set up to restore the pavement of the entrance square and the perimeter walls. Mapping, cleaning, consolidation, substitution (replacement), discussion and sharing of proposals to be applied to a ruins’ site: all these topics were the subject of the course. The workshop then carried out restoration works of the pavement and the walls while a proposal was presented for an overall recovery of the area.

Since many years, SEUM collaborates and shares experiences with its French partners. It has set up construction sites in which workers who have jobs that are less common in the labour market, could be trained and practice their skills, such as restoration and enhancement of historical and artistic works. SEUM’s first French experience was with the Municipality of Nancy, concerning youths having problems of job insertion and social inclusion. It consisted of a basic training on masonry, stone-cutting, flooring, wall finishes and decorations.

More recently, groups of young people have participated in restoring the graffiti façades of Victor Hugo School in Sevran, near Paris, and wall paintings and decorations in the former convent of Santa Chiara in Arezzo.
The course also included Fresco technique lessons, in order to enhance the youths’ skills and allow them to be more competitive in the labour market.

The Colossal statue, as it was defined when placed in Piazza Grande, the main square of Arezzo, depicts the Grand Duke Ferdinand III of Hapsburg Lorraine. It was sculptured in Florence in 1820 by Stefano Ricci, from Carrara statuary marble. Moved to the square in 1932, the statue had been poorly maintained throughout the years. Organic patina, dirt and concretions covered its surface; Some damage and vandalism have further altered its look. The Yard School topped off Master Equal project and represented a gift to Arezzo, whose authourities supported and sustained the initiative. SEUM was therefore founded after the exceptional experience of the project funded by the Equal initiative between 2002 and 2005, in which three groups of fifteen students attended a 960-hour training course in Arezzo, Paris and Barcelona while scores of French interns came to Arezzo to upgrade their training and exchange their experience with Italian students.

During the final session of the Yard School, the students directly experienced the entire restoration process of a work of art: relations with the institutions responsible for the protection, construction of the yard according to the security rules, archive research that resulted in some relevant discoveries and involvement of the semiprecious stone plant in Florence for scientific tests. Finally the statue was completely restored, through the coordination of arts restorers employed in the Ministry of Heritage; it involved the students who had participated at every stage of the Yard School course.
The most innovative techniques and up-dated tools and materials have been applied, considering the peculiarity of the intervention.

In the past centuries, Italy exported skilled workers to Northern Europe, the Americas and Oceania. The stone-cutter (or paver) was, among those workers, the most threatened by the arrival of machines, cement and asphalt. Stone-cutting trade gradually disappeared. Yet the streets of historical centers of European cities are paved with stone; the technique does not differ much from that of the Roman basolato roads, the Comacine masters’ works or the Renaissance period. Nowadays, stone-cutting has become a mere supplementary job subjected to rules, tender specifications and auction debates.
SEUM contributed in the course by illustrating the mineralogical features of construction stones, organizing visits to quarries and stone-cutting workshops, techniques of stone paving and finishing.

The students used both manual tools and machines; in particular, they improved their skills in surface processing, ribbon-making, rolling, dressing (punching), bushing (bush hammering), flame and sand-blasting finishes
Areas of practical application have been set up in the laboratory and outside, in an urban area, then restored during the course. The students also had the opportunity to continue learning in building sites town and in some demonstration activities with excellent results.